Lewis finds himself with plenty of talent but also trying to replace eight starters from last season.

“Our strengths are technical ability and a lot of very athletic players who have been waiting for their turn to represent Dexter,” Lewis said. “We should be strong up the middle and we are returning our second and fourth leading scorers.”

So, yeah, the new coach has some quality players to work with as well as some spots to fill.

“We are replacing eight starters so we have to find out who plays best where,” Lewis says. “We also need to find the system and formation that works best for us. We have a lot of talent and options.” 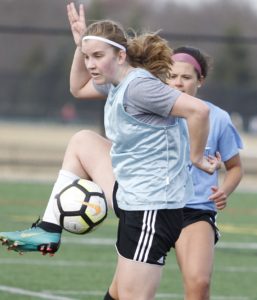 And that’s great news for a new coach or returning coach.

Dexter went an impressive 17-2-1 last year. And the goal for the season is to “meet our potential and make it at least one step further than last year,” Lewis says.

Cabana, who plays for the Michigan Hawks, has been All SEC the past two years. She has several Division 1 offers already on the table (or should that be pitch).

Graham, a four-year varsity starter, is a dynamic technical player who controls Dexter’s attack and is difficult to deal with going forward.

Soccer is Tamer’s second sport – but that has more to do with her first sport than her commitment to soccer. She is a US National Team Field Hockey player who will miss a few weeks representing the United States overseas. She is an elite athlete with great skills who was second on the team in scoring last year as a true freshman. 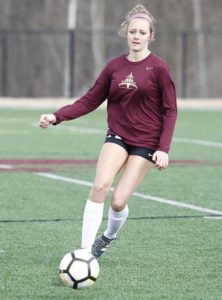 McCormick is a returning forward who played a big part in Dexter’s District title run last year and scored five goals as a sophomore. She has a very strong shot with either foot and has a mature understanding of the game.

Brodersen, a foreign-exchange student from Norway, is a high energy technical player with great speed.

Nya Mahoney, another freshman, is a versatile player who is fast, strong and technical with a high work rate.

The Dreadnaughts play Tuesday at Lincoln.

Written By
Terry Jacoby
More from Terry Jacoby
This is a time like never before when it comes to technological...
Read More