Dexter took a commanding lead before Skyline rallied to tie the game with four runs in the fourth inning, but the host Dreadnaughts answered with a run in each of their final three innings to knock off the Eagles 7-5 in the first game of a doubleheader.

Dexter won a shortened second game 6-3 for the sweep in the non-league matchup.

In the opener, the Dreadnaughts wasted little time getting the offense cranked up. A sacrifice fly by Evan Krolewski scored Alex Mills with the first run of the game in the opening inning. Jacoby Haley ripped a double to drive in another run and the Dreads scored again on a passed ball to take a 3-0 lead after one inning.

An RBI double over the head of the leftfielder off the bat of David Kreske pushed Dexter’s lead to 4-0 after two innings.

But the Eagles came charging back in the fourth inning. After cutting the lead to 4-1, an infield hit by Dayton Stamper along with a throwing error scored two Eagles.  An RBI single to left by Ian Unsworth tied the game at 4-4.

In the bottom of the fourth, Evan Krolewski drew a walk and came around to score the go-ahead run. Dexter added a run in the fifth and one in the sixth to finish the scoring.

Haley picked up the win for the Dreads. The senior allowed four runs on three hits and a walk while striking out three.

Mills and Kreske each had two hits and scored two runs. Kreske also had two RBI and drew a walk. Haley, Kreske and Mills had doubles in the game.

Aaron Goldsmith went 2-for-4 for the Eagles with a run scored and an RBI. Alex Gerdenich, Sam Winger and Ian Unsworth also had hits for Skyline. Jack Young went 3.2 innings and allowed five runs, five walks and five hits while striking out three. Winger pitched in relief and allowed two runs and two hits. 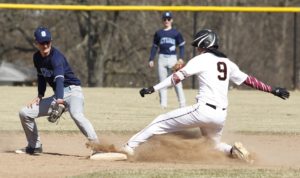 In the second game, Dexter scored five runs in the first inning and one in the second for a 6-3 win in a three-inning nightcap. Trevor Feeman had a two-run double for the Dreads. Reed Ladd got the win after allowing five hits, three runs with three strikeouts.

Bugaski had two hits in the second game for Skyline.