Alex Heidtke received Washtenaw Area Coach of the Year honors at the end of last year in just his third season as head coach of the Dreadnaughts. With so many events and so many athletes, track and field requires a strong coaching staff to help run a successful program which is why Heidtke considered the honor a team effort.

“There are seven other coaches as well, all of whom have a huge impact on the team’s success” said Heidtke, who works with the sprinters.

“All of these coaches have incredible accolades and success on and before joining the track staff,” Heidtke said. 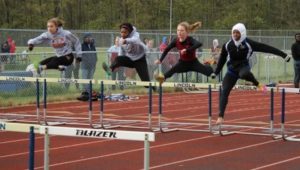 It was a fantastic season last year for the Lady Dreadnaughts who ran undefeated on their way to winning SECs for the fourth straight year.

Pole vault has long been one of the best programs in the state and last year was no different. Led by the outstanding coaches Geoff and Janell Gerstner, six Dreadnaughts went to the State Meet for pole vault, one also went for long jump on top of going for pole vault. Four also went on to compete in New Balance Nationals for pole vault.

Dexter is loaded with many top returnees off last year’s team. Leading the way is senior Nicole Bow, last year’s reigning SEC Championship Meet champion in pole vault, long jump and 300 hurdles. She was also second in the 100 hurdles – meaning she scored 38 of a possible 40 points. She also received Washtenaw Area Athlete of the Year.

Sophomore sprinter Maggie Jordan also returns. She was last year’s co-leader in the 100 (13.24 hand-clocked) and team leader in the 200 dash (27.52 FAT timed). She also won Rookie of the Year last year. 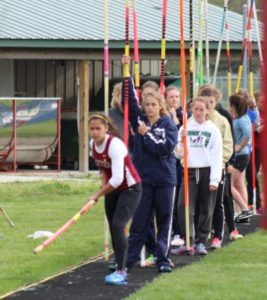 Senior Anna Varitek, last year’s team leader in the mile and team runner-up in the 800 and 2 mile, also is back.

Senior Lauren Bazick, who tore her ACL this fall, has been cleared to run. She should score some points for the Dreadnaughts but her leadership and determination is worth more than any points on the scoreboard.

“She is selfless in her desire to see the team succeed and seems fearless in her effort to overcome her injury,” Heidtke said. “She is one of a kind in this world.”

Dexter’s first SEC meet is April 9 at home against Ypsilanti. The meet begins at 5 p.m.

Written By
Terry Jacoby
More from Terry Jacoby
Jamie Lewis is the new varsity girls’ soccer coach but this is...
Read More