It might not be Thomson-Shore’s final chapter but it is for at least 80 of their employees after the Dexter book manufacturing company filed for Chapter 11 bankruptcy protection this week, with plans to sell assets and reduce operating costs.

Thomson-Shore is being acquired by the CJK Group, based out of Minnesota. They will continue operations at the current Joy Road facility but with a much smaller workforce with almost half of the 177 employees being let go as early as next month.

Thomson-Shore, employee-owned, has offered production, publishing, printing, and distribution services since 1972 and has long been considered a great place to work with mostly positive employee reviews. Previous management always took great pride in their relationship with employees and their excellent working conditions and benefits.

The Chapter 11 filing came this week, listing $14.5-million in assets, and $11.6-million in debts, per federal court documents.

Lori Minnick, a vice president for CJK, said that they expect those losses to be permanent and added that the plant is not closing, and that there will continue to be employees working for CJK at the current location.

The sale of Thomson-Shore to CJK is expected to be completed this month, with the 80 workers losing their jobs as early as May 6.

CJK Group Inc. is a technology based parent company to numerous independently managed communications and manufacturing plants nationwide. They combine the personal attention of each company with the strength of an industry-leader in technology to the communications industry. According to its web site, the CJK Group has grown by acquisitions to become the successful company it is today.

Their secret? “Our companies maintain who they are and by following best practices across our broad base of companies specializing in technology, communications, printing and manufacturing,” according to the web site. “Each of our companies keep their identity, customer relationships and culture they’ve worked hard to establish along with our core values at CJK Group, Inc. We value and continue to invest in the relationships of each company and their growth within our CJK Group.”

CJK Group holds its core values to a high level, again, according to the web site. They state they want their employees to have fun, that they develop people, have integrity, are cost conscious and are growth oriented.

Thomson-Shore was started by Ned Thomson and Harry Shore in 1972.

The company came a long way from the six people who worked for Thomson-Shore in 1972, including Ned and Harry, which was a dozen by the end of that year. At the time customers submitted camera-ready copy, which means how it sounds. The copy was ready to be photographed and transferred to plates for production. In the early 2000’s the switch to customers submitted PDF files was considered a seismic shift.

Employees approved the purchase of a Heidelberg Speedmaster SM 102 press that replaced an old 4-color Speedmaster SM 102 unit as part of the initial phases of a $10 million capital equipment update in 2009. The new presses required fewer man-hours, but at the same time Thomson-Shore was breaking into the digital press business and in 2011 dove head-first into the e-books market.

Prior to these moves the company shed 10 percent of its workforce just based on market decline for its core business of one-color soft and hard case books.

Volume dropped from 32 million to 26 million units by 2008 but in 2016 returned to 29 million with 20 percent of that business being attributable to e-books, the digital press and publishing services in general. 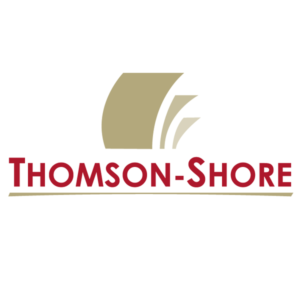 Prior to the recession the core book business was 100 percent of Thomson-Shore’s overall business, compared to just 55 percent in recent years. Diversifying the company didn’t only make it possible to regain the lost volume that the core book business wouldn’t have been able to gain back on its own, but the number of employees increased in 2016 from a low of 140 in 2008 to 175.

In addition to those $10 million in capital equipment additions and upgrades to the business, $5 million in additional software and system upgrades were put in place several years ago to handle order fulfillment, distribution cues, author/publisher compensation and many other steps between and within those broad categories of what happens between an order coming in from an online retailer to the book arriving at the customer’s mailbox from Thomson-Shore’s facility.