The Dexter Dreadbots finished second this past weekend at Ypsi-Lincoln Districts to earn a spot in next month’s state finals. And Andrew Merriman says making the trip to state is another opportunity to fine tune, perfect and hopefully take it to the next level.

“What (qualifying) means for us is it’s just another chance to keep proving ourselves and getting another step closer to worlds,” said Merriman, a senior on the Dreadbots.

The Dreadbots seemed to get better as the event rolled along.

“The weekend at Lincoln went fine as we pushed through a few matches with minor issues to the robot and ended the qualifications round at fourth overall,” Merriman said. “But as alliance selections went on we ended up being the captains of the third-seeded alliance as the No. 1 team picked the No. 3 team thus we moved up.

“Our quarterfinals went the best. We posted one of the highest scores of the weekend (91 points) in the first game. In the semifinals we upset the second-seeded alliance making it to finals but sadly lost in finals. But with that and the winning of the creativity award sealed our ticket to states.” 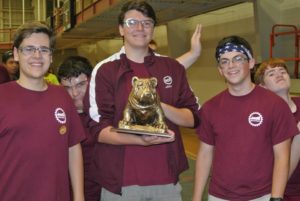 Merriman’s current role on the team is as the team captain, electrical sub-team lead and secondary driver.

“I look at these duties as being a role model or someone others can come to with any issue,” he says. “I see my roles on the team as someone who can help teach members on the team about problem solving and communication skills as others have done for me, and hopefully make them into leaders as well.”

So what makes the Dreadbots run?

“I think the Dreadbots have been successful because we have passionate students who want us to do well under the direction of mentors who want to help us along the way,” Merriman says.

Doing well at competitions and making it to states are only part of what helps make the Dreadbots a great team. For Merriman, it’s more than points and wins. 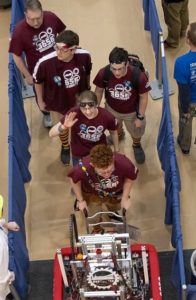 “It’s one of the best experiences and that no matter whom you are you will always be welcome on our family.”

Andrew, the son of Kendra and Michael, who also is in the Dexter High drumline, was first introduced to robotics in seventh grade from a friend on the middle school team. He joined the next year in eighth grade and was hooked.

“The first thing I liked about robotics was the freedom I had to create my own robot and get to see the ideas form into something that actually moved and completed a task,” he said.

Merriman plans on attending Michigan State University with a major of electrical engineering. But first he hopes to help engineer a trip to Worlds with his fellow Dreadbots.