Spring is the time for showers, baseball, soccer, track, golf and of course trap shooting. Yes, Dexter has a trap-shooting team and a pretty good one at that. The Dreadnaughts shot down an eighth-place finish last year at the National Championship and are looking to move up this year.

“We have several coaches to help improve our skills and help us train,” says team member Spencer McMichael. “We had about 30 athletes on the team last year, but we shoot in squads of five. We did very well in competition last season.”

The trap-shooting season begins in mid-April and all the main competitions are done online so they team doesn’t have to travel. Schools are separated into several conferences, and compete against each other within their conference until the championship.

The team, which competes in the USA High School Clay Target League, shoots two rounds per week, and the coach uploads ther scores to the website to be compared with the rest of the conference. If they qualify for State or National championships, they go to the Michigan Amateur Trapshooting Association range in Mason to compete.

The Dreads are coached by Bill Hoffman.

The team was formed in 2016 with seven Dexter students and has seen significant growth since its inception. The roster for this coming season will be around 40 students.

“With every year that we have grown in size, our performance has improved as well,” says Hoffman. “ Last year (2018) was our best season yet finishing first in conference for the spring and fall leagues, placing second in the state and finishing eighth in the nation at the inaugural USA Clay Nation Competition.”

After the spring league is done all the teams in Michigan get the chance to compete head to head at the State Shoot June 15, 2019. The Nationals event is July 10-14 again being held in Michigan at the MTA (Michigan Trapshooting Association) located in Mason.

“We are looked at as a club and are self funded (parents and students),” Hoffman said. “We are working on fundraising activities and open to sponsorship to support the team for new uniforms and equipment for the 2019 season.” 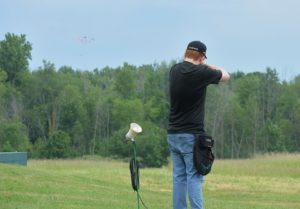 The Dreadnaughts are currently working with the Washtenaw County Pheasants Forever Chapter 151 and the Friends of the NRA and they also are part of the Midway USA Foundation to help raise funds for future expenses.

“I think one of the best parts of this club and sport is the diversity that we have on our team,” says Hoffman. “It looks like about a quarter of the team will be female.  All cross sections of sports, academics and clubs.  Band, orchestra, field hockey, dance, robotics, theater, tennis, golf, football, baseball, cross country, track and field – the list goes on.”

For more information on the league: www.miclaytarget.com.