We have a winner. Everyone else can go home. There is nothing else to see here.

Christian Vaughan perfectly sums up what it means to be a Dreadbot. There really is no better way of describing what robotics – especially at Dexter – is all about.

“It’s the hardest fun you’ll ever have,” Vaughan says.

“It’s amazing to see a bunch of people who are actually really smart, but need to find a way to show it and I think this is the place to get it out there,” he continued. “There’s nothing better than watching something you built win competitions.”

And the Dreadbots win competitions! 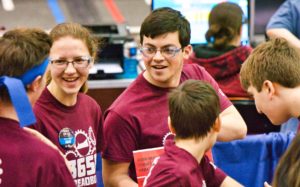 Vaughan, a senior, also has a theory as to why and how the Dreadbots are so successful.

“I think the reason we do so well is because we all have a common goal, but we also have a wide variety of personalities and ideas,” he says. “We find ways to have a blast while putting in hard work five days a week. We also have a great group of mentors that are extremely helpful in times of need.”

Vaughan says the highlights for him so far have been helping the team to two victories at regional competitions. “I think that being the primary driver and seeing ourselves win the Belleville competition was the most excited I’ve ever been,” he said.

“I’d like to continue to improve the autonomous functionality of the robot. We have cameras on the robot that can be used to detect objects on the field, and we can run vision code to make the robot move on its own to align itself with the object it needs to get to.”

Vaughan has been an exclusive programmer since he first joined. 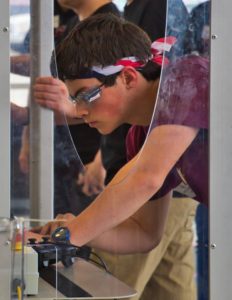 “I don’t know why, but working with the computer that controlled the robot really drew me in,” he said.

He is currently one of three team captains, the leader of the programming team, and a member of the drive team.

“I help to try to organize events, and be one of the ones for newcomers to look up to,” he said. “My role on the drive team means that during competitions, I’m the one down on the field manually controlling the robot via USB game controller. I work with a teammate to operate every function that the robot is capable of.”

Vaughan first experience in robotics was in a sixth-grade elective where they used Lego Mindstorm kits to make super simple robots by following instructions. It was love at first Lego.

“That was my favorite class I’d ever had up to that point, and I was pretty disappointed when the class was over,” he said. “The next year I was part of the first VEX Robotics team at my middle school. This brought me into a whole new world, since we would be able to actually expand our creativity and build robots how we wanted.

“The first year was rough, but the club was much more refined once I was in eighth grade. At some point, my mom showed me a video on Facebook of the high school’s FRC team driving their Frisbee bot from the game Ultimate Ascent. I knew from then on that I wanted to be a part of the team, and joined as a freshman.”

Vaughan said he likes robotics because of how many choices there are when you first join. Because there are so many options, no one gets left out.

“There’s something for almost everyone, whether it’s hardware, software, money management, spirit, safety, or even community service,” he said.

Christian, the son of Brian and Sherry Vaughan, has a 3.53 GPA and also is heavily involved in band. He’s also twice done pit orchestra for the drama club’s winter production.

“I plan to pursue a degree in computer science or game development,” he says. “I’m either going to be attending Michigan State University since I’d love to be in the Spartan marching band, or Western Michigan University as a slightly more affordable option.”

Written By
Terry Jacoby
More from Terry Jacoby
A basketball game is often a rollercoaster on steroids and the team...
Read More