Abbie Van Noord needs speed dial on her calendar or a six pack of fit bits. But what she really needs is for the earth to take longer to travel around the sun because she barely has enough time to do all the things she likes to do.

The sophomore at Dexter HS is on the programming sub-team for the Dreadbots, Dexter’s famously successful robotics team. Oh, but there are so many more chapters in this story.

Abbie also plays flute in Symphonic Band; is on the leadership team for SNAP (Students Need Accepting Peers); is a member of a peer mentoring program to help students with special needs; and is in the WIS (Women In Science) club. 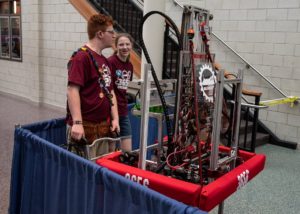 In the spring she is a member of Dexter’s outstanding track and field team where she does the pole vaults, long jump and hurdles. And in the classroom she is jumping over hurdles and crossing the finish line with a 4.0 grade-point average.
It’s tiring just typing all of that.

And why does she keep so busy?

“Probably because I love learning,” she says.

Well, that explains it.

Abbie, the daughter of Jon and Annabel Van Noord, was first introduced to robotics when she joined the Lego Robotics Club in fourth grade. In seventh grade, she joined the middle school VEX team, and also saw the HS team several times when they came down to Mill Creek.

“The first thing I liked about robotics was that almost 50 students, with different interests and personalities, but with a common goal, could come together to build, wire, and program a robot, from scratch with minimal adult help,” she says. “Last year I joined the programming sub-team, where I was taught by our amazing sub-team lead Christian Vaughan, as well as programming mentors Stephen Miller and Sherry Vaughan. 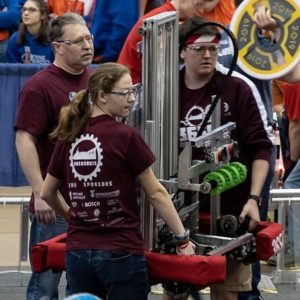 Last year, Abbie primarily worked on autonomous code (code for completely pre-programming the robot to pre-form a task) for the Dreadbots. She also helped out the strategy team by scouting (collecting data from matches) and the service team by helping at events such as the Wylie STEAM Night.

“This year, I’m still on the programming sub-team, but have been working on tele-op code (code for the driver controlled time period), and have also contributed more to the service team by helping the Lion’s Club with their Christmas Tree Sale and helping to plan events,” she said. “I have also contributed to discussions with the strategy team pre-competition, and educated team members on how to scout. The biggest change for this year is that I’m on the drive team, as the human player (I get to place game pieces on the field), which is what you’ll see me doing at a competition. This means I get to wear the cool, stripy drive team socks.” 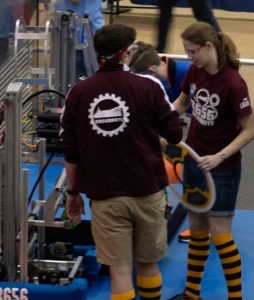 The Dreadbots have built themselves quite a reputation around the state and Abbie believes their success primarily due to strong students who are willing to put in hard work and learn from their mistakes.

She also credits student leaders/upperclassmen who have passed on their knowledge to younger team members, and mentors who know how to teach students the skills they need without getting too involved with our robot.
And with this blueprint has come not only awards and honors but memories and highlights.

“I am only in my second year on the team, but I think the highlights have been not only winning our Lakeview event last year, and Belleville this year, but also just the time I’ve spent with like-minded, inspiring students that I wouldn’t have met otherwise,” she says. “I’ve even met international students from places such the Netherlands, France, and Japan.”

Her goals for the rest of the year are to develop autonomous code with the programming sub-team, to improve her robot driving skills, and for the team to qualify for worlds and continue its success.

“I do not yet have definite plans for after high school, but due to school and robotics, I have developed a love for math and science that I want to pursue in college, although I haven’t narrowed it down past that,” she says. 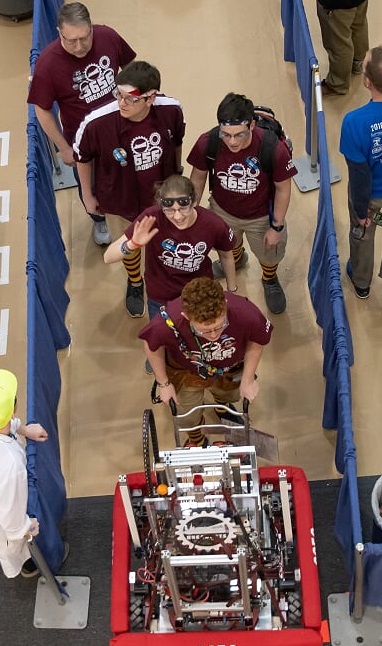 Written By
Terry Jacoby
More from Terry Jacoby
After their impressive showing at the Detroit Golf Club, the Dexter golf...
Read More