The campaign is complete. The food has been weighed. And a group of Girl Scouts accomplished their mission of “spreading a ton of love.” Third and fourth-grade Girl Scouts at Wylie Elementary school recently gathered 1,601 pounds of food for Faith In Action.

Five 3rd and 4th grade Girl Scout troops (about 40 girls) met with Miranda Salazar from Faith in Action, and created a slideshow to present to the students at Wylie. Girls broke into groups, created talking points, made presentation pages and chose a speaker for their portion of the project. Posters were made to hang around the school as well as bulletin board decorations talking about Girl Scouts and the Campaign to Spread a Ton of Love.

The slideshow was presented to the entire school by the Girl Scouts and food collection began on Feb. 4. The idea was to collect one ton of food for Faith in Action in order to Spread a Ton of Love.

There were two tables within the school in which the third and fourth graders put their food donations. Every week a group of Girl Scouts stayed after school to weigh and sort the food. The food was then removed from the tables and stored until the Assembly presentation on March 6.

Numbers were added up and charts and thermometers were updated with the new numbers. Two Girl Scouts also made an announcement the following morning to the school updating everyone on how close they were to reaching their goal.

The final numbers were presented at an assembly on March 6.

This was part of a Girl Scout journey badge which is a multi-step badge in which the girls develop, plan, implement and take action on a project. 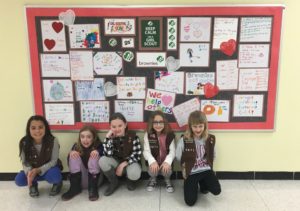 Written By
Terry Jacoby
More from Terry Jacoby
Three in a row – and counting. The Dexter swimming and diving...
Read More