When Spencer McMichael first joined the Dreadbots he had designs on being a programmer. But just a few days in with the Dexter High School robotics team he discovered what he really wanted to do – and he hasn’t stopped doing it since.

“Within several days of trying different roles within the team, I discovered my true passion of mechanical engineering,” he said. “Being able to use my hands to problem solve and work with tools to create specialized mechanisms on our robot is one of the most enjoyable parts of the robotics season.”

McMichael, now a junior on the team, says he loves “the freedom of creativity that it granted” when talking about his passion for robotics.

“When I first joined the robotics team, I had never been truly able to think of my own designs and ideas for a group project,” he says. “In the past, most team activities that I experienced were closely guided by adults with one set goal in the end and very little room for experiment and thinking. But when I joined robotics, I finally got to exercise the creative part of my mind and provide meaningful contributions to the project.” 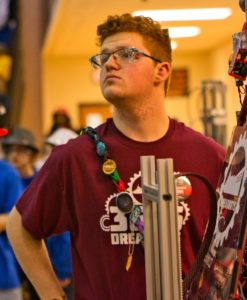 Being on the ground floor gives McMichael an interesting perspective on why the Dreadbots have been so successful.

“The Dreadbots have been successful for many different reasons,” he says. “The always positive atmosphere, strong leadership, and the passion to reach a common goal has driven us to success year after year. We strike a perfect balance between having a good time and focusing on the task at hand, which greatly boosts both morale and productivity within the team.”

And he sees that productivity continuing.

“Thanks to a passionate student team, knowledgeable mentors, and a supporting community, the Dreadbots will continue to improve and strive to be the best we can be,” he says. 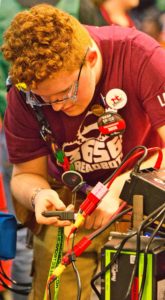 Spencer, the son of Nicole and James McMichael, also is building success in the classroom where he currently has built a 3.47 GPA. A member of the school’s trap-shooting team, McMichael was introduced to robotics in middle school.

“I was always interested in technology and engineering, but I was first introduced to robotics by the Vex Robotics program in middle school,” he said. “It was there that I learned of my love for robotics and leadership. The mentor of that program recommended that I join the FIRST robotics program in high school.”

He is currently the team’s Mechanical Sub-Team Lead. His role as a leader has allowed him to not only enjoy the many aspects of designing and constructing the robot as a student, but also enjoy mentoring other students by teaching the skills and methods that he has learned in previous years. 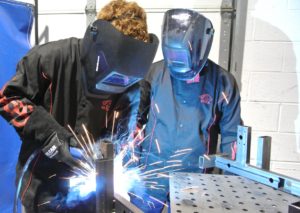 He says being a Dreadbot has “vastly changed my life.”

“This team has taught me many valuable skills; from using tools and welding, to social and leadership skills that prove to be very useful in everyday life,” he says. “Spending so much time working together to accomplish a common goal has built a brotherly bond between us, giving us all a sense of pride to be part of something so special.”

He hopes other students follow his lead and discover all the rewards, relationships and possibilities that robotics has to offer.

“I always tell people that there is something for everyone on this team,” he says. “Most people think of Mechanical, Electrical, and Programming when they think of robotics, and those are large parts of the team, but this isn’t all it has to offer. There is also sponsor relations and fund management for our future businessmen/businesswomen, community outreach for our social butterflies and STEM advocates, and strategy for those that love using logic and knowledge to gain a competitive edge. FIRST also provides invaluable experience in STEM careers by teaching with immediate real-life application that simply cannot be achieved in a classroom.” 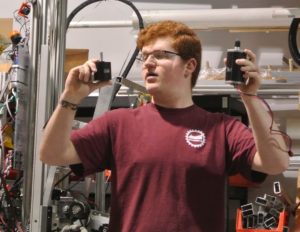 McMichael’s main goal this season is to go to the playoffs in the World Championship in Detroit. He also wants to focus on building relationships both within the Dexter team and with other teams.

He hasn’t decided which college he wants to attend when his high school career is powered down but he wants to study mechanical engineering.

“Because of robotics, I now know that mechanical engineering brings me great satisfaction, and I can’t wait to see what my path holds for me in the future,” he said.

This is one in a series featuring members of the Dreadbots!

Written By
Terry Jacoby
More from Terry Jacoby
“A Night at the Museum” is Friday, May 10 The Dexter Area Museum...
Read More