Michael McHugh has been coaching the Dexter swimming and diving team for 13 years and in that time he has added plenty of hardware to the trophy case – including the last four Division 2 state championship trophies.

He’s seen a lot of outstanding swimmers come and go wearing the Dreadnaughts cap but few with the commitment of Niklas Eberly.

“Nik has a focus unlike anyone I’ve seen,” says McHugh. “He sets his goals and works tirelessly to achieve them. He is always committed to the process knowing that it will allow him to meet his own expectations. He’s been great to work with, I never had to wonder what I was going to get from him, I knew I’d get his best.”

His best was the best in two individual events on Saturday during Dexter’s first-place finish at the D-2 state meet at Eastern Michigan University. The senior sprinted to a first place in the 50 freestyle with a time of 20.40 seconds. He returned to the winner’s circle in the 100 butterfly, touching first in 47.79.

Those two wins accounted for 40 of Dexter’s 239 points. 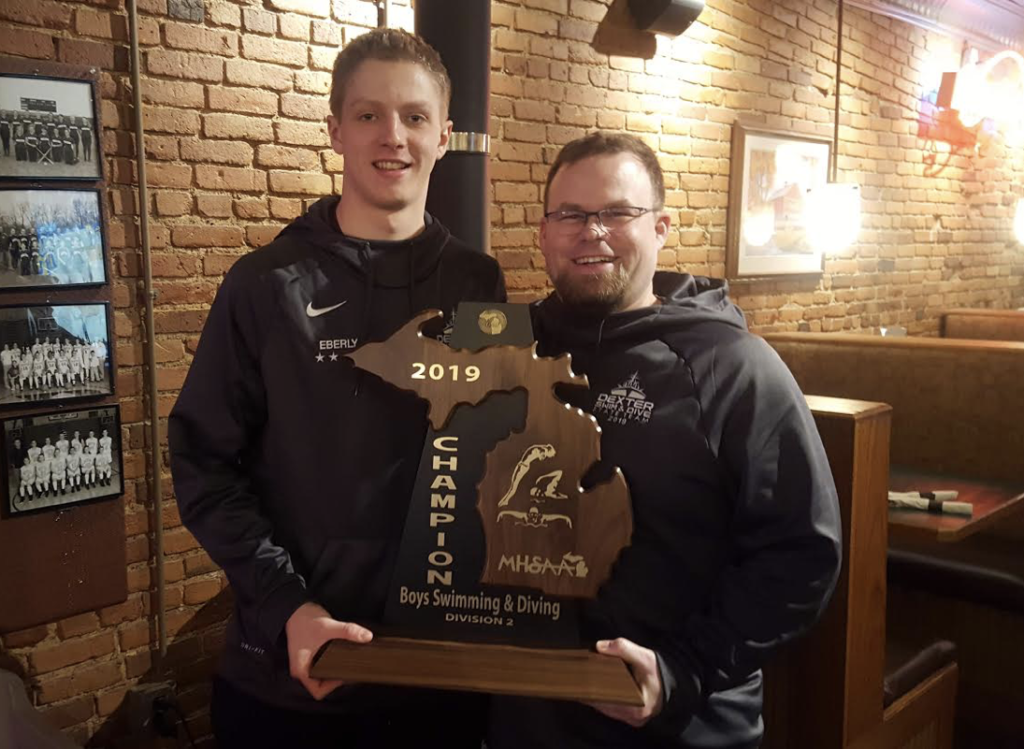 Eberly also swam on the second-place medley relay team and first-place 400 free relay team. So his scorecard featured three wins and one second on the day.

“Nik had a great meet,” said McHugh. “He was a part of four new varsity records on the weekend.”

Eberly tied Dexter’s 50 free record, broke his own 100 fly record and led off the team’s 400 free relay with a new record in the 100 free. His fourth was the final event of the weekend with his teammates in the 400 free relay to punctuate the team’s title.

Needless to say, Eberly was pleased with his results on Saturday.

During the finals Eberly said he only got better as the day moved along.

“The first half for me and a few others seemed a little slow,” he said. “We came in second in the 200 medley, which surprised us. And my 50 was way closer than I wanted it to be.

“But after diving things for me started to change. Cole (Warren) moved up to sixth place in diving, which was amazing. I destroyed the 100 fly. Paul (Schaefer) and Tanner (Sharp) swam great 100 breaststrokes, Casey (Dolen) won the 100 free, and (Clayton) Kinnard moved up in the 100 back. At this point I knew we had a good shot at winning the meet.”

In fact, Dexter had the meet locked down before the final event, the 400 free relay.

“Going into the final event the whole Dexter team was pumped,” Eberly said. “We were seated over a second faster than any other relay team. When we got into the ready room, I started telling my relay team, this is the last race, give it everything you have left.”

For Eberly and Dolen it would be their last high school race and the duo wanted to go out in style.

“We walked out to the song ‘Hey Ya’ by OutKast,” Eberly said. “That song has been our walk out song for the 400 free relay for years now. As I stood in front of the block I knew I had to give my team a big lead. As I dove in I went into racing mode. When I finished and saw the 44.5, I knew I had done my part.

“Casey was our anchor, and I was yelling at him before he jumped in to finish this race. When he touched the wall and ended the race, our coaches came over and told us we had done it. We were so happy.”

Eberly said this year’s state meet was different than his previous two with Dexter. 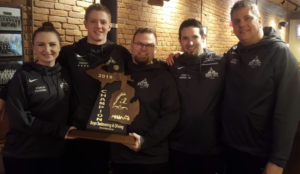 “The last two we had bigger numbers and more upperclassmen,” he said. “This year we were a small team. Casey and I were the only seniors at finals for Dexter, and a lot of our swimmers don’t have the big meet experience that Casey and I have. I was nervous going into the meet. But as the meet went on we pulled it together and won. For me it was the most satisfying win at states.”

“When they announced the winners I was so happy,” he said. “I just laughed, and shook my coach’s hand and congratulated him.”

Eberly, who took first in the 200 free and 100 fly at last year’s state meet, will swim next year at Auburn University where he plans to study business.

“I am so excited to be continuing my swimming career at an amazing school in the SEC,” said Niklas, the son of Anna and Paul Eberly.

And what a career it’s been so far.

Written By
Terry Jacoby
More from Terry Jacoby
After having trouble putting the ball in the basket on Monday against...
Read More