What’s going on in Dexter? Really. Four consecutive swimming and diving state championships. Is there something in the water? Is it a run of great athletes? Is it magic?

None of the above (except the great athletes). It’s a blueprint that if followed will guarantee success. It doesn’t guarantee state titles but it sure seems to end up that way every year for the Dreadnaughts.

Dexter splashed up its fourth consecutive Division 2 state swimming and diving title at Eastern Michigan University on Saturday. And while on paper it looked like it was easy – the Dreads won by 36 points – nothing at this level is easy.

“This team was a lot of fun to coach,” said Dexter head coach and the designer of that blueprint Michael McHugh. “They were always laughing and having a good time, never took themselves too seriously, yet always performed when they needed to.”

There was an easiness about this team. They enjoyed each other’s company, enjoyed what they were doing and when you enjoy something the work doesn’t seem like work. But there is no doubting that this team worked extremely hard and it paid off on Saturday – like it always seems to do.

COMING TOMORROW: A look at the brilliant day & career of Dexter swimmer Niklas Eberly
MORE ON THE FINALS: https://welovedexter.com/2019/03/09/dynasty-splashes-on-dexter-wins-fourth-straight-boys-swimming-and-diving-title/

“We knew on Saturday that (Birmingham) Groves would come out firing and they did,” McHugh said. “They swam a great meet.”

Dexter won the meet with 239 points while Groves finished in second place with 203. Seaholm was third with 181.5 points. 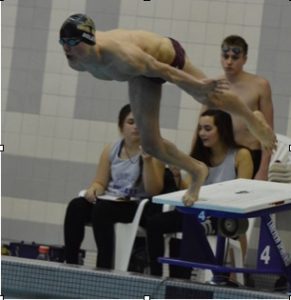 “Our focus was on not panicking and taking their shot and responding with ours,” McHugh said of Groves. “I feel like diving really gave us the shot in the arm we needed to finish off the meet. The whole team was up watching Cole do his final dive, it was amazing to watch.”

Cole is Cole Warren, a freshman diver who picked up 13 points for his team with a sixth-place finish in diving. At the state meet, every place up the board equals more points and they add up in a hurry and those unexpected points can really make a difference.

Dexter had a few key seniors at the top of the lineup this year.

Senior Niklas Eberly was a double-winner, touching first in both the 50 freestyle and the 100 butterfly. Senior Casey Dolen came in second place in the 200 freestyle and won the 100 freestyle.

“I was honored to contribute a first in the 100 free and second place in the 200 free for a good amount of points for our team,” Dolen said. “I felt that after the first few events, all we needed to do was avoid false-starts on the relays and we would have the win.”

Unlike some previous meets, the Dreads had this one locked up before the final event.

“Going into the final event, it was pretty clear that we had the title, so when I dove in the water, I felt oddly relaxed as I knew we had won,” Dolen said.

They also won the final event – the 400 free relay – just for good measure.

“Winning this title was a bit different compared to others as we didn’t have the major depth like recent years, but we had more high-scoring finishes than previous years which made up for it,” Dolen said.

McHugh was very proud of Dolen because he was one of the swimmers leading the way into the pool every day.

“I am so proud of and happy for Casey Dolen,” said McHugh, in his 13th year as coach of the Dreadnaughts. “He has worked so hard to be a state champion and handled not winning the 200 amazingly well.

“He came back in the 100 free to win by .02 seconds. His ability to finish races is something that cannot be taught, he was made to finish, which is why we anchored him on our free relays. He loves the pressure and swam his best races to finish off his career as an individual state champion, but also a relay title and varsity record.”