The Dexter Dreadbots spent the weekend in Belleville and after a long two days left with some impressive hardware, including the championship.

The Dreadbots, along with the alliance teammates – the Code Red Robotics from Milan and the MC Hammers, from Michigan Center – finished first overall out of 40 teams at the FIM District Belleville Robotics Event (FIRST in Michigan District) on Friday and Saturday.

The Dreadbots, who are 15-3-0 in official play in 2019, currently rank 15th with 69 state qualification points – a combination of points earned winning matches and awards. Grant Wagner was the author of the business plan that won the Dreadbots the Entrepreneurship Award.

The Dreadbots finished in fourth place after the finals and were chosen by No. 2 Milan Code Red Robotics to join the second-seeded three-team alliance. 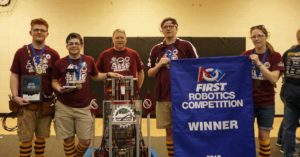 The Dreadbots finished first after defeating the team from Livonia (Churchill and Stevenson), Ann Arbor (Pioneer) and Ann Arbor (Washtenaw Technical Middle College) in the final.

The team from Livonia (Churchill and Stevenson), Ann Arbor Pioneer (Pi Hi Samurai) and Ann Arbor Washtenaw Technical Middle College (Strange Quarks) was seeded fifth heading into the playoffs and won two big matches on the way to the final.

They defeated Monroe, Okemos and Saline, the fourth-seeded team, in the first round. The Livonia and double Ann Arbor teams then knocked off the top-seeded team of Redford, Carleton Airport and Ferndale in the semifinals to reach the championship match.

The Greenhills team (the Greenhills Lawnmowers) were seeded third and defeated the team of Fowlerville, Canton/Salem/Plymouth and Inkster in a first-round playoff match.

FIRST combines the excitement of sports with the rigors of science and technology. Under strict rules, limited resources, and time limits, teams of 25 students or more are challenged to raise funds, design a team brand, hone teamwork skills, and build and program robots to perform prescribed tasks against a field of competitors.  It’s as close to real-world engineering as  students can get. Volunteer professionals and mentors lend their time and talents to guide each team, making the experience valuable and unforgettable for both the student and the mentor. 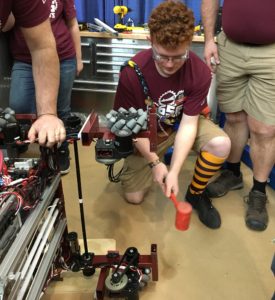