Busch’s has moved staff from other stores to their Dexter location to meet increased demand. They will soon employ another type of staff – of the technological kind.
Dexter’s only grocery store has gotten a lot busier since the closing of Country Market last November. This is particularly noticeable in the checkout lanes where both staff and customers are exercising patience in dealing with longer than usual lines, especially during the afternoon commute. To help relieve the longer waits, Busch’s is installing four self-checkout stations.
Todd Robinson, spokesperson for Busch’s, explained, “We had planned on installing these stations previously, but the timing works because business has picked up.” 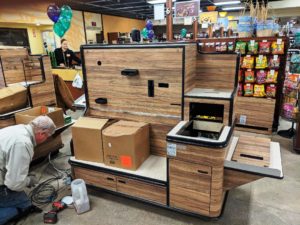 In answer to everybody’s question, Robinson says the stations should be operational within the next month or so.
If you’ve seen some new faces on staff at Busch’s, its not your imagination. The increased business has brought crew in from other locations. “Whenever a particular store is extra busy, we flex staff from others stores to help,” says Robinson. “We are looking to hire additional staff in Dexter so we would encourage anyone intersted to apply through our website at www.Buschs.com.
Robinson expresses the appreciation Busch’s has for the Dexter community and the importance of giving back. “Busch’s is proud to be a part of the Dexter community and we love being your source for Local Michigan products,” he says. “Dexter is also our top performer in our Cash for Education program which donates money to local schools. As Michigan’s largest independent grocery chain we are committed to the communities we serve.”