Their camaraderie was palpable from the moment that they entered the auditorium on Monday afternoon, February 18, 2019. On Presidents Day, Representatives Debbie Dingell and Fred Upton came together at The University of Michigan’s Gerald R. Ford School of Public Policy to discuss how they work through their differences. On the heels of John Dingell’s passing, and the many visitations and funeral services last week, both politicians fought through emotions and tears during the hour and a half discussion.

Michael Barr, the Joan and Sanford Weill Dean of the Public Policy, opened the discussion by noting the “extremely challenging times for our nation and increasing lack of trust in institutions everywhere.” He noted that Dingell and Upton are the “antithesis of partisan politics,” based on their years of reaching across the aisle to put forth laws to help all Americans. Before Debbie replaced her husband John’s spot in Congress, John Dingell and Fred Upton had a long history of friendship; Upton spoke at Dingell’s funeral.

The event was moderated by Brendan Nyhan, a professor of public policy at the Ford School. He began by asking the representatives about our current political atmosphere. Upton responded by stating that we all need to be working together to solve our nation’s problems. Dingell’s answer was very true to her forthright character, saying, “I look at somebody as an individual. I don’t look at someone and say, ‘Oh, you’re a Republican or you’re a Democrat.’” Debbie Dingell herself used to be a Republican, which she noted during the event. She then joked saying that she “got smarter” and changed sides.

Debbie Dingell noted that the common ground that she and Upton (who is proud to have formed the Moderate Republican Caucus) share are their love for the state of Michigan, including the Great Lakes and the auto industry. Healthcare, taxes, and infrastructure were also mentioned. Both representatives agreed that the most recent tax bill “could have been a lot better.” Dingell teased Upton, saying that the Republicans should have written it differently, to which the audience responded with laughter. 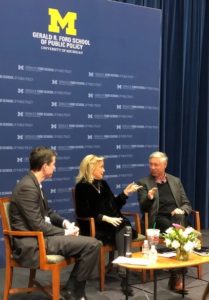 The most recent shutdown was addressed. Upton admitted that everyone came out a loser in the end, although it was voted on by both him and Dingell. Now they are both working to try to help those whose lives were hurt while they were unpaid for 35 days. Dingell thinks that they only good thing that has come out of the shutdown is that it has caused more people to pay attention and get involved in politics.

Upton also noted that during the shutdown, about 30 members of Congress met at a restaurant to discuss immigration reform. Then his own Problem Solvers Caucus met with the President two weeks ago (Dingell stated that she didn’t) to discuss the agriculture workers and the dreamers – he wants to help them. Dingell pointed out that the DACA kids are Americans and classmates of many of the audience members. She suggests building a coalition to bring together people from both sides. With her signature emphatic voice, Dingell stated “Let us stand up, stop letting people divide us with fear and hatred – stand up to bigotry.”

Climate change was also a big topic of discussion. Upton asked if anyone in the audience didn’t believe in climate change, to which Dingell joked, “We are at University of Michigan, not Trump University!” Upton said that he publicly scolded the President for pulling out of the Paris Agreement, and he argued that we must all be working to help the environment and to “show the way for the rest of the world.”

Dingell brought up her work in Congress with her fellow Democrats. She says that she and Alexandria Ocasio-Cortez have become good friends – she wants to work with her on becoming a carbonless society. Dingell argues that Americans aren’t buying electric vehicles because we don’t have the right infrastructure system to support it. Rashida Tlaib is another good friend of hers. Says Dingell, “I talk to people, I find where their common ground is. I want to protect jobs. This is the difference between a man and a woman – they find more common ground. That’s why we need more women in politics.”

The question was asked what can Americans do to encourage bipartisanship? Dingell responded that Americans need to hold people accountable and that too many people still think their votes don’t matter. She encouraged the audience to get involved and go to town hall meetings. She noted how people rose up when kids were ripped away from their parents at the southern border, holding Keep Families Together rallies across the nation. Says Dingell, “We need more of that.”

Upton commented that while much of the 24/7 media tailors to the hard right and the hard left, he states, “most of us are in the main lane.” A great example of this is the House Bill HR8 that Upton and Dingell are co-sponsoring and that 97% of Americans support; this bill would close the loophole in our current law that does not require background checks for online and gun show sales. This bill could save lives.

Another topic that became quite emotional for both Upton and Dingell was the opioid crisis. Upton let the audience know that last year, Congress passed about 60 bills to work on this pressing issue, and the President signed every one – including bills for more education, funding, and even trying to find a non-addictive painkiller. While Upton told his personal story about his first boss’ nephew becoming addicted to heroin as a high school student and dying, Dingell was too emotional to even get into it, confirming once again that mental health is a top issue for her. “We need to do a lot more. We are just starting to scratch the surface,” according to Upton.

There were also more straightforward topics, such as NAFTA and the Trans-Pacific Partnership, both of which Dingell stated that she did/does not support. She argues that there is not a level playing field. Both Dingell and Upton expressed their anger about jobs being outsourced to Mexico, especially amid the recent General Motors layoffs. Says Dingell, ““My job is to support jobs for the working men and women of this country. I will do whatever is right.”

In the end, both Upton and Dingell agreed that there is a lot of work to be done. With much emotion, Dingell encouraged everyone to read her late husband’s piece in the Washington Post that he dictated to her on the day that he died. In it, he encourages Americans to be a little gentler with each other and to not let partisan politics destroy us. On Monday afternoon, these two representatives showed us just how it’s done.