The 3 p.m. event will be held at the Center for Performing Arts in Dexter High School, 2200 North Parker Road, Dexter.

Directed by William Gourley, the program will include a special connection to the band’s history. James Hosay’s Highlander Legacy: Variations on “Comin’ Thro’ the Rye,” was commissioned by the band in memory of its founding conductor, David Angus.

The 85-member Dexter Community Band performs four free concerts a season. After the Winter Concert, the final performance of the season will be the Spring Concert, Bugs Bunny Goes to the Symphony, on May 5, at 3 p.m.

Founded in 1982, the Dexter Community Band is comprised of volunteer musicians from the local area. A registered 501(c)3 non-profit organization, the band performs professional-level symphonic wind music at four free concerts a year. There are also several free “Evening of Ensembles” featuring small groups from the band. For additional information about the band or how to provide financial support, please visit http://www.dextercommunityband.org/. 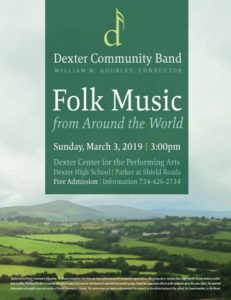