Trevor Eisele responded to a challenge the best way possible – by accepting the challenge and changing the situation.

As a junior, the Dexter hockey player started off on the forward line, playing both the wing and center positions. But an injury forced him to the sideline.

It was when he returned to the ice that things began to melt – so he decided to do something about it.

“My junior year I got injured halfway through the season,” Eisele says. “When I came back I was unhappy with my spot so I worked really hard and improved the most I ever have. The team did better too.” 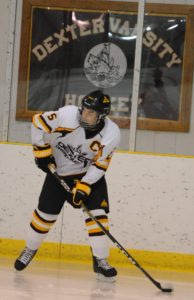 Instead of accepting his situation or giving up, Eisele skated his way back to where he wanted to be through hard work.”

Eisele is a co-captain this season along with Kyle Knapp and the two seniors are a big reason for Dexter’s success this season.

“They are the leaders of this team and both are very good leaders,” said Dexter Coach Justin Young. “They work hard and are very smart players. They are consistent players every time they step on the ice. Their strong leadership is evident on the ice, in the locker room and outside of the arena. They are great kids.”

Eisele says he started playing hockey when he was 5.

“I really liked the excitement from playing a fast-paced competitive game,” he said. “I started taking it seriously in the eighth grade when I realized I wanted to be better.”

He played travel hockey from the time he was 6 years old until his sophomore year at Dexter.

As a sophomore at Dexter, he played left wing, bouncing around between all the lines. “We didn’t do very well, but it was fun and I developed a lot,” he said. 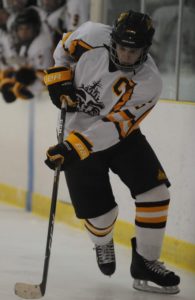 Fast forward to this year and things are going well for both Eisele and the Dreadnaughts.

“I’ve played mostly center but some wing this season,” he said. “I’ve been really successful. The team has worked hard and our record shows it, having the best season Dexter has seen in years.”

That record and their performance on the ice has the Dreads skating with high hopes the rest of the season.

“I have high hopes for the team this year, and my goal is to make a run in playoffs if not win the state championship,” he said. “My goal is to help my team know we can make it to the finals, and my personal goal is to score 25 goals in the regular season.”

Eisele, who has 21 goals on the season this year, knows better than anyone that the way to accomplish their goals begins with hard work and smart hockey.

“We need to work on our discipline if we want to reach these goals,” he says. “We have the talent and heart but it’s the dumb mistakes that are hurting us.” 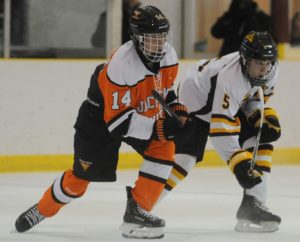 Dexter struggled in its first few games but turned up the intensity and good things have happened ever since.

“We realized we needed to play harder if we wanted to be a good team this year,” Eisele said. “After that we won 9 of 10 and things were really clicking.”

Trevor, the son of Jeff and Brenda Eisele, also scores goals in the classroom. He currently has a 3.76 grade-point average.

“After high school I plan to walk on to a D1 team like Western or State,” he said.

But first there are goals to score and goals to reach for Dexter.