Phil F. Jenkins, 95 years old, of Ann Arbor, MI passed away peacefully in his home surrounded by loved ones on Saturday, February 2, 2019.

Phil was born on August 4, 1923 in Detroit, MI. He received his engineering degree from Purdue University and served in the US Army during World War II. He was devoted to his family and was a wonderful friend to many. He was an incredibly successful businessman and always said, “It’s better to be lucky than smart”. He also surrounded himself with great people whom he credited for his success. He owned Sweepster (formerly Jenkins Equipment) in Dexter, was a real estate developer, investor and philanthropist. He was retired, but never stopped working. He was able to travel the world and always said that he lived a long and wonderful life. 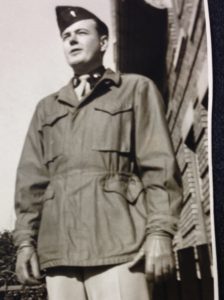 Phil was extraordinarily giving.  With this success he became the “angel investor” in just about every nonprofit in Washtenaw County, but because of his modest lifestyle and refusal to have anything named after him, few knew the extent of his generosity.  He was especially interested in donating to causes that supported children and older adults as well as medical research specifically targeting mental health and cancer. His support in these areas helped educate countless medical professionals around the world. Phil supported, believed in and invested in people  and his community and his  legacy will live on for years to come.

He was an incredibly unique man that changed the lives of all that he came across. Phil was hilarious and often joked about how hard it was to be perfect like him, teasing about his “natural beauty”. He had a very colorful vocabulary and never hesitated to tell people what he thought, often making use of all that color in the process. He had many one-liners that he used regularly like: “You can’t make a silk purse out of a sow’s ear”; “It’s hell to get old”; and jokingly (in most cases!) calling people “dumb and dumber”. Phil was all bark and no bite. He had a tough exterior, but was the most caring and generous man.

Phil was a funny, generous, bold, innovative, extremely strong-willed, loving, visionary that made it his life’s work to love and take care of his family, to work hard and to give back to his community and the world. He was his red haired little girl Lee Ann’s hero. He will be deeply missed. In the immortal words of Phil, “KABOOM!”

A private family celebration of his life will be held in lieu of a public memorial at Phil’s insistence. In keeping with his philanthropic legacy, donations may instead be made to Arbor Hospice and/or the University of Michigan Depression Center.

Donations to Arbor Hospice can be made here:  https://www.arborhospice.org/donate/ .