Casey Dolen began swimming when he was only 4 years at the Ann Arbor Country Club. He probably didn’t realize at that time that swimming would not only become a big part of his life, but also create a work ethic and commitment level that goes far beyond the pool.

“I’ve always enjoyed the dedication it demands, along with the friends I’ve made through the sport,” says Dolen, one of Dexter’s top swimmers on a team loaded with top swimmers.

Dolen is hoping to pull off an amazing accomplishment with a few of his fellow seniors – four state swimming titles. Last year at the Division 2 state finals at Oakland University, Dolen was fifth in the 200 freestyle (1:41.13) and third in the 100 freestyle (46.47). He also swam on the winning 200 free relay team and the runner-up 400 free relay team as he helped lead the Dreads to a third straight state title. 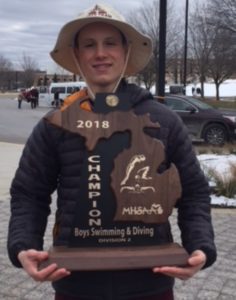 Dolen says it’s the commitment level from coaches and swimmers that has put the Dexter swimming and diving program among the elite in the state on a consistent basis.

“I would say that the time consumption (the early mornings and practices that go late, combined with homework) and the physical demand from the difficult training is what makes Dexter so good,” says Dolen, who has swam club year-round for over a decade and began devoting all of his time to swimming in middle school.

Dolen, whose first two years were spent more as a distance swimmer, has become an elite sprint freestyle swimmer over the past couple of seasons. He’s helping lead a talented Dexter team that appears on course for another shot at a state title.

“This year’s team has an odd diversity of swimmers,” he says. “We have a few younger kids who haven’t swum before, and a few kids who have the ability to swim at serious colleges. We have already had some major improvements in younger swimmers this year, and I can’t wait to see how everyone does at the end of the year.” 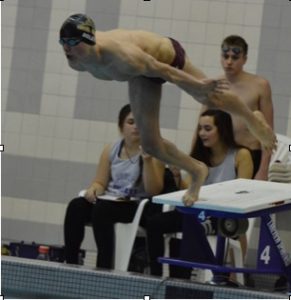 Whatever happens this year, Dolen will never forget his previous state titles run.

“My first year, it was incredible,” he said of winning a state title as a freshman. “It seemed absolutely crazy to me, but as the year went on, it felt a little different. Last year, I felt more honored to contribute more points to the team, which made it feel more of an accomplishment, but less of a jaw-dropping moment.”

Casey, the son of Stephen and Wendy Dolen, also has made a big splash in the classroom – he has a 3.8 GPA.

“I plan on attending a university (hopefully I’ll decide soon) and majoring in medicine,” he says. “I also plan on swimming in college.”

Written By
Terry Jacoby
More from Terry Jacoby
It was no surprise to see Tecumseh out in front during the...
Read More