Dexter Community Schools’ vast construction project is reaching its pinnacle this week with the opening of the new Beacon Elementary School.

Greg took me on a tour of the new school in its final days of preparation before students arrive this coming Thursday. I met Greg in the office of Cornerstone, soon to be renamed Anchor Elementary. After fitting me a hardhat, he led the way.

“The first day students will arrive is this Thursday,” Greg told me. “Thursday and Friday are half-days of school and will be used as orientations for the kids explaining where things are and what things are. The first official day of classes is Monday the 28th.”

Beacon Elementary is a mirror image of Cornerstone (soon to be “Anchor”) Elementary. The two schools are joined in the middle by flexible shared learning spaces.

One of these flexible learning spaces is dubbed “Market Place” which teachers can use as breakout sessions for curriculum units they’re working on with students.

The other flexible learning space will be called “The Workshop.” This space will be set up and used for thematic learning. For example, if the school wide theme is Space then the area could be set up with planets, posters, and other visual and experiential teaching tools for students to engage. Currently for such units, teachers and students must arrange and rearrange the room constantly in an effort to vary the learning experience.

Greg’s Journey from Dexter … to Dexter

The walk through wasn’t only a tour through the new elementary school. I was interested to hear more about Greg’s journey from a student in Dexter schools to building Dexter schools.

Greg graduated from the old Dexter High School (now Creekside) in 2000. From there he went on to the University of Michigan and graduated in 2005 with a degree in Civil Engineering. Before graduating, he took an internship with Granger Construction in Lansing and was assigned to a project for South Lyon Schools.

From there Greg has worked on many different projects including construction of Martin Luther King High School in Detroit, the same in Lincoln Park and Belleville. As the projects mounted up, Greg climbed the corporate ladder to his current position as Senior Project Engineer.

“I’m not necessarily involved in the day to day construction anymore,” Greg explains. “I’m responsible to make sure the project overall is meeting the owner expectations. I keep an eye on budget and communicate with the onsite superintendent who is managing the actual subcontractors.”

“I stated at Copeland when it was kindergarten and first grade,” Greg says. “Then I went to Bates and Wylie. Mill Creek opened when I was in eighth grade.”

Greg lives in Dexter with wife Jenna and their two sons Henry and Lloyd. Building a school for the district where he himself went to school has special significance for Greg, especially where his sons are concerned.

“My youngest is a second grader and so this semester he’s going to get to use these flexible learning spaces,” says Greg. “That’s pretty cool to think about. I also have a niece and nephew coming up through the school system so they’ll be coming here too.”

“The largest project I’ve done is the one I just came off of which was U of M’s South Campus Athletic Complex,” says Greg. “It was a 168 million dollar project of four buildings on 22 acres. These facilities are for the non-revenue sports such as track, field hockey, and lacrosse.” 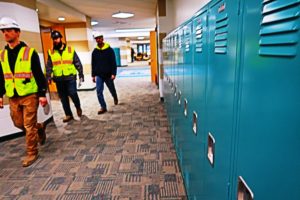 The new facility is state-of-the-art. For example, the indoor track has hydraulics under it to lift it so that it has banking for distance running. To reduce wear and tear on their knees and ankles, sprinters need a flat track but long distance runners do better with banks.

The project was largely funded by billionaire Stephen M. Ross, owner of the Miami Dolphins. He gave the University 100 million dollars toward the project. As amazing as that may seem in itself, it is even more astounding to learn this is the fourth time he has done this for U of M.

A dedication ceremony for the new school will be held on Monday, February 11th at 5:00 p.m. in the commons at Anchor and Beacon Elementary Schools on Dan Hoey Road.  The ceremony will officially dedicate the buildings and will provide an opportunity for the public to tour and see the building.  In December, the DCS Board of Education approved naming for the complex and both elementary schools.  The Cornerstone Anchors will now become Anchor Elementary and the Bates Beacons will become Beacon Elementary as part of the new Dexter Early Education Complex.