Sometimes, history just happens. Other times it takes an incredible, even Herculean effort. But history went way beyond Hercules or Ethan Hunt or even Superman on Friday night at Al Ritt Stadium as the Dexter football team followed four consecutive winless seasons to earn the program’s first ever trip to the state playoffs with the “Miracle in the Rain.”

The victory gives Dexter a 6-2 record, locking up a playoff spot, with one game remaining on Friday. A win over visiting Whitehall could give Dexter a home playoff game – which would be bad news for any visiting team considering Dexter’s raucous student section.

So, back to the Miracle! And hyperbole and exaggeration are not necessary when one considers the facts. Here are the only two facts needed to support “Miracle in the Rain.” Fact 1: Visiting Lincoln ran off a 91-yard TD run to build a 42-21 lead with 7:58 left in the game. Fact 2: It was raining.

In the final 7:58, the Dreadnaughts scored 27 points while the Dexter defense shut down the Railsplitters – both incredible accomplishments considering what occurred the previous three plus quarters in the game. There was no question the Dreadnaughts have the talent on offense to strike quickly but considering how they were playing up to that point, the way Lincoln was running off big plays, the cold and rainy weather conditions and the fact that less than 8 minutes remained in the game all seemingly added up to a frustrating loss for the Dreads.

But this team proved that “special” didn’t stop with ending the program’s 42-game losing streak or winning back-to-back games for the first time in forever or winning a fifth game to move to a win from the playoffs. They took “special” to a whole different level with a 48-42 victory over Lincoln – sending the Dexter fans stampeding onto the field and more importantly the football team stampeding into the playoffs.

“Realizing that we were down by three scores with only 7 minutes left was definitely hard to grasp, but we had some momentum changes and some fantastic play on offense,” said Dexter senior LB Evan Chapell. “Karl Kerska’s onside kick couldn’t have been better leading us for our last score.”

Chapell, who was all over the field on defense all night, said the comeback was a total team effort. “I our defense stepped up as we had some of our players injured,” he said. “The young guys were put in an unbelievably hard position as they were out on the field in the fourth quarter trying to get us to the playoffs. If that’s not the definition of adversity, than I don’t know what is.”

That is definitely the definition of adversity.

Colin Parachek had some rough moments in the first three quarters but a quarterback is judged by how they respond to challenges and adversity. The sophomore stepped up and delivered when it mattered most.

“Coming out of halftime playing a not so good half and still being tied we were very confident,” he said. “Then (Andy Durand) returned the kick for a TD and we knew this was a time we could seal the game.

“Then everything turned. We had some injuries, a terrible turnover and killed ourselves. And going down 42-21 with nothing going our way, as much as we tried to stay positive, it wasn’t easy.”

Then things turned again – this time, in Dexter’s favor.

“Knowing our team though we never have and never will give up,” Parachek said. “One David Kreske recovered the fumble we fed off the energy and fought back like we all knew we would. It was so unreal. Everybody’s emotions were everywhere. By far the best moment of my life.” 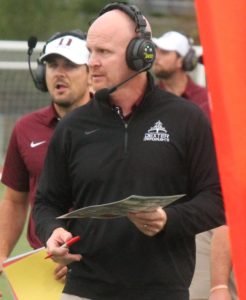 To get rolling on the comeback trail, the Dreads quickly answered Lincoln’s latest long run with a quick score – of course it helps when the Railsplitters kept kicking off 15 yards basically giving Dexter the ball at midfield but who are we to judge. Joe Luallen’s one-yard run cut the lead to 42-27 – the extra point was no good.

Dexter attempted an onside kick but the Rails didn’t give it up. Instead, the Dexter defense locked down and forced a fumble recovered by Kreske after a couple of plays to get the ball back. Parachek threw a 16-yard TD pass to the very talented Antwan Ficklen for another quick score to cut the deficit to 42-34.

With about 4:30 left in the game, Dexter kicked the ball deep and let the defense make a stand – which they did, forcing a three and out.

After a Lincoln punt, Ficklen caught a 17-yard TD pass from Parachek. The Dreads went for the tie but could not convert the two-point conversion and still trailed 42-40 with 2 minutes left in the game.

The Dreads tried an onside kick and this time Kerska delivered the perfect kick which Dexter recovered to set up the offense for the potential winning drive.

With about 1:20 left in the game, Parachek threw an 8-yard TD pass to Ficklen for a 46-42 lead. Mason Loudermilk ran in the two-point conversion to push the lead to 48-42.

The Dexter defense shut down Lincoln in the final minute and the celebration commenced as the Dreadnaughts celebrated not only the amazing victory but a trip to the postseason.

The rollercoaster of an evening began with Lincoln running the ball right down the field for an early 7-0 lead with 8:15 left in the first quarter. A penalty and turnover ended Dexter’s first drive.

The Dexter defense stopped Lincoln on fourth and one at the Dexter 27-yard line. But the offense punted after three and out.

On third and eight, the Railsplitters ran off a 67-yard TD run to take a 14-0 lead with 2:09 left in the first quarter. The Lincoln defense then forced a punt and things were not looking good for the home team.

But the special teams came up with a special play – and the ball after Lincoln fumbled the punt. On fourth and five at the Lincoln 25-yard line, Paracheck threw a TD pass to Loudermilk to cut the lead to 14-7 with 18 seconds left in the opening quarter.

The Dreads had a chance to score later in the second quarter but a pass into the end zone was intercepted. Lincoln had a 77-yard TD run called back because of a penalty with less than a minute left in the quarter.

Durand, a fast and quick senior receiver, sent the Dreads into the lead when he took the second half kickoff to the house to give Dexter a 21-14 lead.

Lincoln’s first series of the second half was a huge moment for the Dexter defense. After the Rails had already converted two fourth-down plays on the drive, Dexter stopped the visitors on fourth and one at the Dexter 9-yard line.

Then came the “Miracle in the Rain.”

“To know going into week nine that Dexter is a playoff team for the first time ever is unbelievable,” Parachek said. “We can’t wait to go out against a solid team like Whitehall and try to improve to 7-2 and push for a home playoff game.”

Dexter racked up 417 yards of total offense while Lincoln had 526 yards. The Dreads had five turnovers while the Rails turned it over four times.

Written By
Terry Jacoby
More from Terry Jacoby
At the start of the fourth quarter, the packed Dexter student section...
Read More