Playoffs? No, let’s not go there. At least not this early in the column (I mean season).

The Dreadnaughts were impressive on Friday night in their 36-22 win over visiting Ypsilanti. It was the team’s first win since Sept. 23, 2013 against Adrian. There were four complete losing seasons in between.

Dexter not only made big plays, they made little plays. And that’s the difference between this team and many others that came before them. 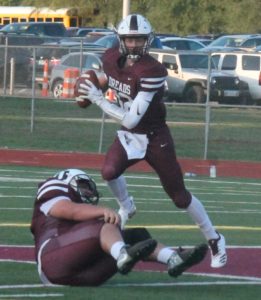 Did they miss tackles? Yes. But with every missed tackle was another Dexter player waiting for his shot – and more times than not he didn’t miss. The defense was all over the field, busting through the line and if not getting the runner, forcing him into bad situations.

The offense is led by quarterback Colin Parachek. He is a sophomore on the roster, but plays like a senior on the field. He displays a great combination of poise and leadership with a strong and accurate right arm – as I write this in the stands, he just threw a 69-yard TD pass.

Antwan Ficklen is another player who stands out on a football field. For those old enough to remember – think Thurman Thomas. He can catch it out of the backfield and run it with an explosive combination of speed and quickness. He’s a special player.

Speaking of special, special teams were very impressive – as I type this in the stands, Nathan Norris just blocked a punt. Yeah, that’s pretty special. They have a big-time kicker in Karl Kerska and don’t think that’s a little thing. It’s huge – just ask Ypsilanti, whose kicker couldn’t get his boots over 15 yards most of the time.
Anyway, in high school football, the little things add up to big things.

And that is one of the differences for Dexter.

It’s only one win but it’s time to stop comparing this team to former Dexter teams. It’s time to compare them to other teams on the schedule. We don’t want to look too far down the schedule (full disclosure, I looked and there might be five or six more wins but then we would have to bring up the playoffs).

Even thinking that is testament to how good the Dreads looked on Friday night.

The Dreads line up well this week Huron, a program that hasn’t won in a few years and is looking to stick one in the win column. The River Rats also have improved this year and despite being 0-2 will be a challenge. But the Dreads seem to be built for challenges – and maybe even the (playoffs).

Whatever happens later on down the schedule, Friday night was special. The students, the band, the parents, the supporters, the community all celebrated this victory by a group of young men who have worked extremely hard during the off-season and since camp opened earlier in the month.

One win is in the books – it’s on to next week. Let’s leave it there for now.