At the start of the fourth quarter, the packed Dexter student section started chanting: “We believe that we will win.” It was loud. And then got louder. The students have believed in the past but since 2013 have been left disappointed.

This time was different. Very different. For one, the Dreads were leading 30-16 with 12 minutes to play in the game. That, alone, was reason to believe.

And their faith was rewarded this time as the Dexter varsity football team defeated Ypsilanti, 36-22, for their first victory after four losing seasons. It was pandemonium (or fandemonium) after the final whistle and a well-deserved celebration for players, coaches, students, supporters and the community. 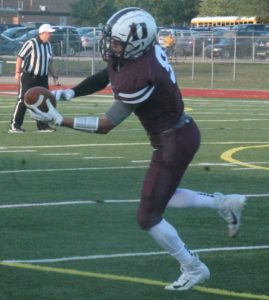 The Dreads started off strong. After an initial three and out, Dexter went to work on offense. A 57-yard pass from Colin Parachek to Andy Durand brought the Dreads to the Ypsilanti 7-yard line. On his third try, Mason Loudermilk busted it into the end zone and Dexter had its first lead of the 2018 season.

Karl Kerska kicked the extra point as Dexter led 7-0 with 3:04 left in the first quarter.

On Ypsilanti’s first offensive play from scrimmage after the Dexter TD, Charles Johnson ran 85 yards for a score. The Grizzlies converted the two-point conversion for an 8-6 lead with 2:44 left in the first quarter.

Antwan Ficklen returned the kickoff to midfield to set the Dreads up with excellent field position. And they would take advantage of it. On the first play of the second quarter, Ficklen ran five yards for the score as the hosts took a 14-8 lead with 11:54 left in the second quarter.

The Dexter defense then grabbed the spotlight. Jordan Watson and Nathan Norris combined on a sack to pin Ypsilanti at the 1-yard line. The Grizzlies would survive long enough to punt – and then it fell apart.

A botched punt bounced and rolled along the 15-yard line. While players on the sideline yelled “poison,” which means to get away from the ball, Ficklen had other ideas. The junior saw an opening, raced up to the ball, scooped it up and sprinted the 15 yards for a Dexter TD and a 20-8 lead with 9:37 left in the half.

Ypsilanti tried a fake punt that backfired, giving the Dreads the ball at the 21-yard line. A 5-yard pass from Parachek to Durand pushed the lead to 27-8 with 1:49 left in the half.

DREADS DIDNT WORK THIS HARD FOR WON AND DONE

The Grizzlies completed a 48-yard TD pass with 54 seconds left and added the two-point conversion to make it 27-16 at halftime.

Nathan Morris blocked a punt and recovered at the Ypsilanti 25-yard line with 1:23 left in the third quarter.

Parachek rolled out to his left and fired a 69-yard TD pass to Ficklen to push the lead to 36-16 with 8:29 left to play in the game. The roar from the crowd could have been heard all over Washtenaw County as the Dreads put the game away.

An interception by Sean Callahan was the final highlight of many turned in by the Dreadnaughts. Make that the victorious Dreadnaughts.

“We believe that we will win!”