It came midway through the fourth quarter with the Dreadnaughts clinging to a one-point lead over host Pioneer in a Class A District final on Friday night. Freshman Kylee Niswonger, all 5-foot-4 of her and the smallest player on the roster, grabbed the ball from the hands of Pioneer junior Asaria Turman, who is 6-foot and probably twice the size of the ninth grader.

Niswonger fell to her knees and still wouldn’t let go of the ball. The result was a jump ball but showed the fight in these Dreadnaughts. They had the lead and weren’t going to let go.

Down 21-20 midway through the fourth quarter, the Pioneers had several shots at regaining the lead. But each time the shot missed and the Dreadnaughts grabbed the rebound and headed down court.

With 3:28 left in the game, the Pioneers got the ball again down a point. This time, Pioneer coach Tyrone Hicks called time out.

But it was the same result. Dexter held on defense. It turned out to be Pioneer’s last chance to take the lead in the game.

Niswonger beat her defender, drove to the basket and scored to push Dexter’s lead to 23-20. Pioneer freshman Felicia Stewart missed a tough three-pointer at the other end with 1 minute to play in the game. 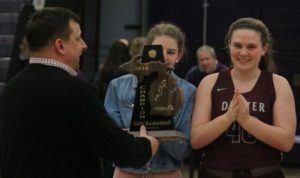 Senior Nicole Tuzinoski put the game out of reach with two free throws with 54.7 seconds left on the clock and Dexter won the District title with a 27-23 win over the Pioneers.

Truman and Stewart led the Pioneers with eight points each.

Dexter (15-9) advances to a Regional game against Hartland at 5 p.m. on Tuesday at Walled Lake Western HS. Hartland (19-5) won its District 61-21 over South Lyon East on Friday.

Dexter coach Mike Bavineau said the key to not only beating Pioneer but winning the District started a few weeks ago.

“We played a couple really good teams over the last two weeks of the season and won those games and that gave us a lot of confidence,” he said. “Then when we played Huron (in Monday’s District opener) and played the way we were capable of and win the game the mindset changed to well we’re not losing now.”

The Dreads knocked out favored Huron in that opening game and never looked back, knocking out both Skyline (Wednesday) and Pioneer (Friday) – two teams that Huron defeated handily during the regular season.

“We knew nothing was going to be easy and would have to fight for everything,” Bavineau said. “We knew this game was going to be tough. We battled hard and figured out a way to get the W. This has been the mentality that they’ve had.

“We had a really bad game a few weeks ago and turned around and beat Chelsea. And that really ignited us and everyone started playing for each other.”

Dexter took a 6-5 lead into the second quarter thanks to a couple of baskets from Niswonger.

Stewart drove down the lane early in the second quarter to give the home team a 9-6 lead but Dexter came right back.

A jumper by Kendall Rosevelt gave the Dreads a 10-9 lead. A jumper by Kylie Cabana pushed the lead to 12-9 before halftime.

In the third quarter, two free throws from Turman cut the Dexter lead to 15-14. But Cabana scored the next time down the floor to give the Dreads a 17-14 lead.

A basket by Corine Burgard cut the deficit to 17-16.

Written By
Terry Jacoby
More from Terry Jacoby
While the numbers don’t add up to a state title this year...
Read More