Paula Palmer Burns talks with pride about the past, confidence about the future and assurances about the present. In other words, all the bases are covered – just like a good insurance policy.

Palmer Insurance is proof that an honest, family-owned business that believes in community and looks out for the best interests of its neighbors – when you live next door to your customers you can call them neighbors – can still exist in a small town in 2018. The calendar has flipped a few decades since Edward “Ned” Palmer first opened the business as a “winter job” back in 1962 but the name and the values and beliefs the name stood for is why the business has succeeded.

They started out as an independent insurance provider and that moniker has not only stuck, but also is what helps set them apart. Palmer Insurance, located on Baker Road, is still operating in Dexter as an independent agency representing a variety of carriers in life, property and casualty and health insurance.
“We have seek out and have contracts with multiple insurance companies,” says Palmer Burns, the president of Palmer Insurance. “I look for the products that I like, the way they do business, their financial stability, and their reputation and character in the market place. I interview them as much as they interview me.”

And because of her experience and expertise, Palmer Burns knows the questions to ask on both ends to find the best plan for her “neighbors.” Her resume is as impressive as any in the insurance business. She literally grew up in the business, going on insurance calls with her father when she was just a kid and “running the mail” to the office as early as age 5. 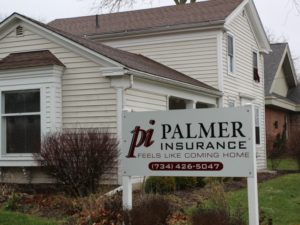 “Every customer is unique so it gives us the option to look at their specific situation whether it’s personal or business, their specific location and run the whole proposal through multiple companies to find the best fit for coverage and of course pricing,” she says. “I can give the customer options and explain to them the differences and then show them the bottom line in pricing.”

In 2014, a tornado hit Dexter, making national headlines and bringing destruction throughout the town and leaving a trail of loss in its wake. Palmer Burns was there to help people not only deal with the financial impact but to assure them that they were covered and would be taken care – lifting a huge emotional weight off their shoulders.
“We had never had anything like that before in Dexter,” said Palmer Burns, a third generation Dexter native. “We work as an advocate for our client in a claim. During that week I was on site to every place we could get to and I was lucky enough to know the neighborhoods and back roads because it was very difficult to get around. We were very involved in helping people get through the process. It was scary for a lot of people because they didn’t know what was next or even how to start because they’ve never had to do it before.

“It was an adventure and I learned a lot about the promise that we make when we make that sale.”

Being in town now for more than 50 years, Palmer Insurance is one of those longstanding Dexter institutions. The company was started by Paula’s father and built with a “concrete” foundation of hard work and honesty.

Ned Palmer, a concrete contractor by trade, needed to find a source of income for his family when it was too cold outside to poor concrete. He found part-time work selling insurance and quickly turned part-time into full-time with his own agency in 1962.

In the early 1960s, Dexter was a huge farming community. And Palmer wanted to take care of his “neighbors” by including coverage called “specialty risks,” things many agents and companies wouldn’t cover. Folks in the area with cattle and heavy machinery were among the more difficult to insure.

“I grew up over there in the corner and my kids will be here in a few minutes and they’ve grown up here, too,” Palmer Burns said. “It really is the definition of a family business passed on down the line. Mom was doing the books, dad was selling insurance and the kids were here hanging out.”

They have been in the house on Baker road since 1980. And will more than likely be there another 50 years, providing insurance and assurance for their Dexter “neighbors.”

WeLoveAnnArbor.com and WeLoveDexter.com would like to welcome Palmer Insurance as an advertiser and supporter of local community news. If you like what we are doing here with local coverage and want to see us continue to grow, you can help us by supporting our advertisers. It’s a win-win-win!!!

Written By
Terry Jacoby
More from Terry Jacoby
“A Night at the Museum” is Friday, May 10 The Dexter Area Museum...
Read More